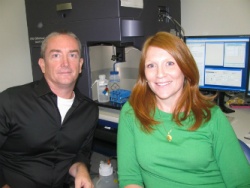 A new study led by University of Pennsylvania researchers has now identified a crucial signaling molecule involved in counterbalancing the immune system attack.

“The immune response is like driving a car,” said Christopher Hunter, professor and chair in the Department of Pathobiology in Penn’s School of Veterinary Medicine. “You hit the accelerator and develop this response that’s required to protect you from a pathogen, but, unless you have a brake to guide the response, then you’ll just careen off the road and die because you can’t control the speed of the response.”

The research to characterize this immune system “brake” was led by Hunter and Aisling O’Hara Hall, a doctoral candidate in the Immunology Graduate Group. Additional Penn collaborators included scientists from the Penn Genome Frontiers Institute’s Department of Biology and the Perelman School of Medicine’s Department of Medicine.Researchers from Merck Research Laboratories, the National Institute of Allergy and Infectious Disease, Harvard Medical School and Janssen Research and Development also contributed to the work, which was published in the journal Immunity.

“Healthy people have these cells—you have them, I have them—that are called Tregs,” or regulatory T cells, Hunter said. “If you don’t have them you develop spontaneous inflammation and disease.”

Different forms of regulatory T cells operate as the brakes on various kinds of inflammation, but, until now, scientists hadn’t been certain of how these Tregs became specialized to do their particular jobs.

Hall, Hunter and colleagues decided to follow up on a molecule called IL-27. Scientists used to think IL-27 played a role in causing inflammation, but, in 2005, a team of Penn researchers, including Hunter, found the opposite; it was actually involved in suppressing inflammation. Thus, when mice that lack IL-27 are challenged with the parasite Toxoplasma gondii, they develop overwhelming inflammation. ”

We never worked out how it did that, but it was a paradigm change at the time,” Hunter said.

In the new study, the researchers delved deeper into IL-27’s role. They found that exposing regulatory T cells to IL-27 promoted their ability to suppress a particular type of inflammation. The Penn-led team also demonstrated that they could rescue infected IL-27-deficient mice by giving them a transfusion of regulatory T cells. This finding suggests that IL-27 is required to produce the Treg cells that normally keep inflammatory responses in check during infection.

Further experiments showed that Tregs express a different suite of genes in the presence of IL-27 as compared to another molecule that has been implicated in this process, interferon gamma, or IFN-γ. The researchers’ findings indicate that the two molecules have division of labor when it comes to suppressing inflammation: IL-27 seems to be important in helping control inflammation at the site of inflammation, whereas IFN-γ appears more significant in the peripheral tissues.

“At the site of inflammation, where you’re getting your pathology, that’s where IL- 27 is important,” Hall said.

With a new understanding of how IL-27 may cause a class of Tregs to become specialized inflammation fighters, researchers have a new target for ameliorating the unwanted inflammation associated with all kinds of autoimmune conditions.

“Now we have a molecular signature that may be relevant in inflammatory bowel disease, in multiple sclerosis, in colitis and Crohn’s disease, in rheumatoid arthritis, in lupus,” Hunter said.

Next on tap, the team plans to study IL-27 in the context of asthma , lupus and arthritis.